Tow truck Ballinteer or TowTruck247 Ballinteer is the best car recovery Goatstown service and car towing emergency vehicle services company.If you need fast and efficient breakdown asssistance service, Towtruck247 is ready to help you.We at Tow Truck 24/7 realise that vehicle towing can be a stressful experience. The last thing one wants is to be waiting around for a towing company to arrive in Ballinteer. You can rely on our services for all your vehicle towing and transportation needs.

Tow Truck Ballinteer from a Local Company in Ballinteer.

Towtruck247 cover on all the twelve motorways connecting to the M50. Ballinteer is a large vilage of the South Dublin. Towtruck247 can help you with vehicle breakdown, car accident, roadside assistance, home jump start and more. If you need a vehicle recovery or roadside assistance in Ballinteer our teams can take care of your problems.All of our drivers are on-time, clean cut, well informed, and trained effectively so they can handle an array of situations with towing your vehicle in Ballinteer so you can be assured your in the right hands.So if you require our expert car towing and breakdown assistance services anywhere in the town of Ballinteer then just give us call! 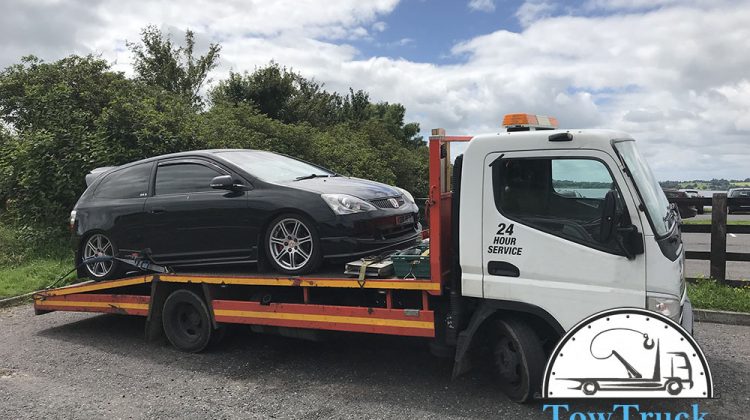 Breakdown on the side of the road or the need for a car recovery in this area can be a stressful experience, and also one of the worst situations that drivers can encounter within Ballinteer area, calling us means a safe and reliable car recovery. We’re a local company in Ballinteer who know the need to return on the road as soon as possible with no stress. Our reputation for fast response, when a car needs a lot of attention is what keeps people coming back time and time again. So if you require our expert car towing and breakdown assistance services anywhere in the village of Ballinteer then just give us call!

We can jump start Car, motorbike, van and commercial vehicle with 12 volt battery. Whether you are in Ballinteer, at home or at your work place and your battery dead, call Towtruck247 team. Not everyone can provide safe jump start or battery replacement for your car. Our professionals team make sure that all safety measure will be respected before your car jump start procedure is started. If the jump start does not work for your vehicle, we then offer you vehicle recovery to a garage of your choice or we can offer you a  battery replace service.

Looking for new car battery fitted in Ballinteer? If your vehicle doesn't start because you have battery problem this can be a bad issue. We will attend to your vehicle, test the battery for performance and jump start the flat battery or supply and fit a battery replacement on the spot. If you or a friend will try to replace the battery, there is a very high possibility that it can cause some injury. This is because the car batteries is highly inflammable and has heavy weight. Also, car battery are so different and every make of car has a proper type of battery. If the car has small engine should be fitted battery with less capacity and vice versa.

Ballinteer is located approximately 10 km (6 mi) from the city centre. To the west is Rathfarnham, to the east is Sandyford and Stepaside, to the south are the Dublin Mountains, and to the north is Dundrum. Ballinteer is also bordered by the 120 hectares (300 acres) Marlay Park.

Ballinteer originally consisted of some housing groups off Ballinteer Avenue (Mayfield Terrace, Ballinteer Gardens, and Ballinteer Park), built between the 1920s and 1950s, and locally referred to as ‘Old Ballinteer’. Ludford Estate was built in the late 1960s, followed by Ballinteer Drive, Grove, Crescent, Close. The latter four roads were originally called Lissadel Estate when built in the late 1960s and early 1970s. The sprawling estate of Broadford was built between the mid-1970s and early 1980s along with the ex-council estate Hillview. The most recent estate, Ballintyre, began construction in 2005 and was finished in mid-2008.

Ballinteer has a range of shops and businesses including a mid-size supermarket located along Ballinteer Avenue. Also located here is a post office, two betting shops and two public houses. Every New Year’s Day, the two public houses play a game of soccer in nearby Marley Park. Marlay Park is a large open parkland, with a craft centre near the old “big house”; the park hosts major concerts every year. Aside from St. Enda’s, Dodder Park and Bushy Park (see above) and small green spaces, the area also hosts two golf clubs.